The Northern Sky is a former Union Pacific 9003 dome car. In his book, THE UNION PACIFIC STREAMLINERS author Bill Kratville records that in 1955 the UP became the last of the transcontinentals to invest in dome cars, labeled Astro-Domes by the UP's Passenger Traffic Department. 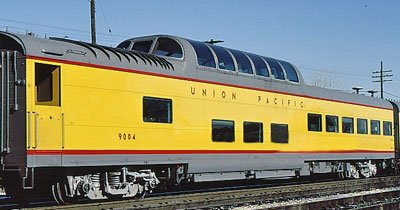 February and April of 1955, the American Car & Foundry's St. Charles, Mo., plant near St. Louis completed a total of 15 (9000-9014) blunt-end observation-dome-lounge cars for the Union Pacific in Lot 4096. (Interestingly, the column which defines these cars in the above mentioned book describes them as five bedroom-observation cars.) The first five, 9000-9004, were delivered for service on the City of Los Angeles, operated over the rails of the Union Pacific and the Milwaukee Road between Los Angeles and Chicago. The City of Los Angeles, or GOLD as it was often referred to, disappeared with the startup of Amtrak on May 1, 1971. But the 9003, one of the comparatively few cars built specifically for this train, is still very much active almost 25 years later.

As constructed, the car seated 24 in low-backed divans in the dome, each offset at a 10 degree angle toward the outside to improve even more the already excellent viewing from the dome. On the main level, a card room at the head of the car seated five. There was room for nine in a cocktail lounge which also had a bar, beneath the dome. Seating capacity in the observation lounge was 19. The observation cars assigned to the City of Los Angeles had a Gold Quartz theme, used in two tones of green and gold on a beige background in the drapery material in the cocktail lounge. The back of the bar in the cocktail lounge depicted the Golden Spike Ceremony at Promontory, Utah.

Just one year after they went into service, all 15 observation cars were reconfigured for mid-train service, most often, it would appear, operating coupled between the dining car and sleeping cars in the train.

The rearmost of the two doors at the observation end was removed and a diaphragm added. Rear-facing observation windows were covered over with sheet metal. The oscillating Mars and backup lights disappeared along with the marker lights. Saddest of all, gone forever were the unique City of Los Angeles blue and red neon tailsigns built into the observation-end of each car. The original Auto-Train picked up the 9003 from the Union Pacific in 1973. Auto-Train rebuilt it into "Maxi-Dome" coach 903 with 24 revenue seats on the main level, 20 revenue seats in the dome, and a bar and small lounge under the dome. Auto-Train expired on the last day of April, 1981, and AUT 903 passed into private ownership following the December 8, 1981, auction of Auto-Train equipment at Sanford, Fla. Late in 1988, Northern Rail Car Corporation purchased the car from Classic Rail Travel.

In mid January, 1992, David Hoffman, a successful Wisconsin State highway contractor purchased the ex-Union Pacific 9003. Northern Rail Car would rebuild the car. "There appears to be a pretty steep learning curve with regard to rebuilding passenger cars," said Hoffman as he recalled his choice, "and I felt Northern Rail Car was over theirs. Among the things we saw was that Northern had already rebuilt a number of dome cars before we showed up. I was satisfied that all of the learning-curve problems were gone and that the Northern Sky could only benefit from the refined process. As you can see, the result is that this car is extremely functional, its components flow well, and it serves exactly the purpose I said I wanted it to do right at the outset. Essentially, we sleep downstairs, use the lounge with its entertainment center primarily as a movie theater, and do all our dining (the car easily accommodates 14 for dining) and entertaining in the dome".